The Real News From Pakistan

Ten years ago Pakistan had one television channel. Today it has over 100. Together they have begun to open up a country long shrouded by political, moral and religious censorship—taking on the government, breaking social taboos and, most recently, pushing a new national consensus against the Taliban. One channel in particular, Geo TV, has won a reputation for controversy more akin to America’s Fox News than CNN or Sky News. Some Pakistanis see it and its competitors as a force for progress; others as a creator of anarchy and disorder. Certainly, the channels now wield huge political influence in a country where half the population is illiterate. But their effect is now felt beyond Pakistan’s borders too—revealing an underappreciated face of globalisation, in which access to television news means that immigrant communities, and in particular Britain’s 0.7m Pakistanis, often follow events in their country of origin more closely than those of the country where they actually live.

I went to Islamabad this April to learn about what many Pakistanis call their “media revolution.” The previous month, during a spate of anti-government protests, Geo TV had again demonstrated its influence by using its popular news programmes to support a “long-march” by opposition groups on the capital Islamabad, and even hosting a celebratory rock concert on the city’s streets when the government caved in to demands to reinstate the country’s most prominent judge.

I had chosen a tense time to visit. On my first day a man loyal to the Pakistani Taliban leader Baitullah Mehsud walked into an army camp two blocks from where I was staying and blew himself up, killing eight soldiers. That same day news channels first aired a grainy video of a Taliban punishment beating in the Swat valley on the northwest frontier. A girl had been accused of infidelity and in the clip she was pinned face down by two men in a dusty village square while a third beat her with a stick. It topped the news for days, causing controversy for its brutality and for exposing the reality behind a “peace deal” to hand Swat over to the Taliban.

The video marked the start of an important new phase in Pakistan’s internal battles, with the army launching a bloody offensive to retake Swat in May, and a further push against the Taliban’s mountainous strongholds during July. Pakistanis have often felt sympathy for the Taliban, seeing their struggle as an understandable reaction to America’s military presence. This view began to change as militants launched more frequent bombings in major cities. But media coverage of Taliban brutality—beheadings, murders and most gruesomely the exhumation of a corpse to be hung in a public square—swayed opinion further. At the beginning of June one story in particular captured the country’s attention: a young army captain, killed on his birthday in a battle with Taliban fighters in Swat. The night before he had written to his father, worrying that he might die, but asking his family to be proud of him and his country. Pictures of his distraught mother ran for days, further pushing anti-Taliban opinion with far-reaching implications in both Pakistan and Afghanistan. And behind this shift lies a new power in Pakistan’s normally rigid hierarchy, which now rivals the ability of politicians, generals, spies and mullahs to shape events: the media itself. 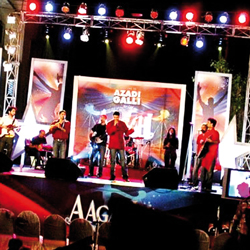 Geo TV is hard to place on the political spectrum and it has many exotic allies. There is, for example, a popular political rock band in Pakistan called Laal (meaning red in Urdu) which has been given plenty of airtime by the channel. The band’s lead guitarist, Taimur Rahman, is a young Marxist-Leninist academic who is finishing a PhD in London. I met him recently at a greasy spoon café close to his academic home at London’s SOAS. He wore a peaked Che Guevara-style cap with a red hammer and sickle badge over his dark, floppy fringe. In conversation, he enthused about music and politics, cracking more jokes than one might expect from a central committee member of his country’s Communist Workers and Peasants party. Rahman told me how Laal’s singer Shahram Azhar (also finishing a PhD at Oxford) was once his student in Pakistan, where both worked as community organisers. The band was a hobby, he said, although the rallies they organised also helped to build a repertoire of songs. Rahman says audiences were especially enthusiastic when they first began borrowing words from a previous generation of leftist Urdu poets, notably Habib Jalib. Both eventually moved to Britain to study, becoming involved in British protests against Musharraf. The band helped to organise protests outside Downing Street, and celebrated when the dictator finally resigned in November 2008. This might well have been the limit of their political involvement were it not for a chance meeting with Pakistani film director, Taimur Khan. At a party in London he heard the band play a song based on Habib Jalib’s poem Main Nay Kaha (“I said”). Originally a swipe at postwar Pakistani authoritarianism, its lyrics resonated with many Pakistanis’ despair at their country’s intractable divisions. Khan says he “knew immediately it was a hit. The lyrics were so timely, they represented the state of the country so simply in one song.”