One of this fall’s most anticipated films is “Where the Wild Things Are,” which attempts to bring the 338 words and 18 pictures of Maurice Sendak’s classic children’s book to life on the big screen. The stakes are high because the book is perfect; its simple story, about a misbehaving kid named Max and the creatures he meets on his imaginary voyage, is now a revered parable about growing up, staying young, and dealing with the unknown. With an army of puppeteers and CGI effects, the filmmakers will also be reacquainting audiences with one of the great supporting casts in children’s books: Sendak’s monsters. The Wild Things – fierce but charming beasts with bulging eyes, fangs, and claws – became, for generations of the book’s fans, iconic. With mismatched animal bodies and goofy, humanoid features, they looked like a cross between ogres and teddy bears. And they promptly claimed a spot in our pop culture bestiary, along with Godzilla, King Kong, and Barney the Dinosaur, where they’ve roamed ever since. 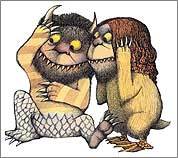 Today is your last day to see Dormitorium, an exhibition of interior sets from films by the Brothers Quay, on display now at Parsons in New York City. Dormitorium, we read, “explores the macabre fantasy world of twin brothers Stephen and Timothy Quay through the highly detailed miniature sets of their influential stop-motion animations.”

The dean of academic programs at Parsons adds:

This exhibition gives our students an opportunity to see how the Quay brothers create intricate fantasy worlds, from set design to finished film through their compelling engagement with literature, their command of sound and lighting design, their uncanny use of focus, color and texture, as well as their mastery of digital editing processes.