California has a special place in the American psyche. It is the Golden State: a playground of the rich and famous with perfect weather. It symbolises a lifestyle of sunshine, swimming pools and the Hollywood dream factory.

But the state that was once held up as the epitome of the boundless opportunities of America has collapsed. From its politics to its economy to its environment and way of life, California is like a patient on life support. At the start of summer the state government was so deeply in debt that it began to issue IOUs instead of wages. Its unemployment rate has soared to more than 12%, the highest figure in 70 years. Desperate to pay off a crippling budget deficit, California is slashing spending in education and healthcare, laying off vast numbers of workers and forcing others to take unpaid leave. In a state made up of sprawling suburbs the collapse of the housing bubble has impoverished millions and kicked tens of thousands of families out of their homes. Its political system is locked in paralysis and the two-term rule of former movie star Arnold Schwarzenegger is seen as a disaster – his approval ratings having sunk to levels that would make George W Bush blush. The crisis is so deep that Professor Kevin Starr, who has written an acclaimed history of the state, recently declared: “California is on the verge of becoming the first failed state in America.”

Outside the Forum in Inglewood, near downtown Los Angeles, California has already failed. The scene is reminiscent of the fallout from Hurricane Katrina, as crowds of impoverished citizens stand or lie aimlessly on the hot tarmac of the centre’s car park.

Cracks in the Future

So it’s dismaying to realize that the grandeur of Berkeley (and the remarkable success of the University of California system, of which Berkeley is the flagship) is being jeopardized by shortsighted politicians and California’s colossally dysfunctional budget processes.

Berkeley is caught in a full-blown budget crisis with nothing much in the way of upside in sight. The school is trying to cope with what the chancellor, Robert Birgeneau, described as a “severe and rapid loss in funding” from the state, which has shortchanged Berkeley’s budget nearly $150 million this year, and cut more than $800 million from the higher education system as a whole.

This is like waving goodbye to the futures of untold numbers of students. Chancellor Birgeneau denounced the state’s action as “a completely irresponsible disinvestment in the future of its public universities.”

(The chancellor was being kind. Anyone who has spent more than 10 minutes watching the chaos of California politicians trying to deal with fiscal and budgetary matters would consider “completely irresponsible” to be the mildest of possible characterizations.)

The Berkeley protest was one of many held across California in an unprecedented day of action directed at university authorities and state governor, Arnold Schwarzenegger as he attempts to curb the state’s multibillion-dollar budget crisis. Faculty, students and unions from the University of California’s 10 campuses including its two most prestigious, UCLA and Berkeley, joined forces in what was the biggest student protest for more than a generation.

The scale of the protests has come as a shock to state authorities. What began as a marginal dispute in the summer between university faculty and their management over cuts in salaries has in recent weeks escalated into a statewide walkout by students and faculty as well as a day of strike action by campus technical workers against layoffs and diminished terms and conditions.

The turning point came two weeks ago when university authorities warned of savage budget cuts to deal with a $750m (£466m) shortfall and mooted huge increases in the cost of tuition. “UC regents vote next week to raise student fees, already up 250% over the last decade, by an additional 30%,” was how one group of protesters summed up the situation today.

This time every summer I begin to suspect myself of going soft and becoming optimistic and sentimental. The mood passes, I need hardly add, but while it is upon me, it amounts to a real thing. On the first weekend of every August, in Palo Alto, Calif., the Japanese community opens the doors of its temple and school in order to invite guests and outsiders to celebrate the Obon Festival.

Japanese babies look like small-scale models of grown-ups in a way that makes one want to laugh out loud, while their old people achieve a sort of fineness and slenderness in bone structure and bearing that causes one to turn the head and also to wish to bow in deference.

I suppose that I am risking these generalizations (Japanese teenagers appear to look pretty much like teenagers everywhere, especially the males, so who knows what’s going on?) because it’s only a few decades ago that Japanese people were portrayed as especially ugly and misshapen and menacing. You don’t even have to look at cartoons and caricatures of the World War II epoch—more recent stereotypes from the economic rivalry of the 1980s were also pretty rough. And the first week in August is when we commemorate, or at any rate ought to commemorate, the first use of the atomic bomb. It is in living memory that this device was used on humans and the term yellow peril used to justify its use. (Japanese skin comes in several attractive shades. Yellow is a nice enough color but is not the word one would use for any of them.)

In the United States, and especially in California, the war against Japanese imperialism was also accompanied by collective punishment of Japanese-Americans and the sequestration of their persons and property. (…)

It was a magnificent run. From the end of the Second World War to the mid-1960s, California consolidated its position as an economic and technological colossus and emerged as the country’s dominant political, social, and cultural trendsetter. Thanks to wartime and Cold War defense spending, a flourishing consumer economy, and a seemingly ever-expanding tax base, the state was at the forefront of the single greatest rise in prosperity in American history. In 1959, wages paid in Los Angeles’s working-class and solidly middle-class San Fernando Valley alone were higher than the total wages of 18 states. This affluence ushered in an era of exhilarating if headlong growth and free spending. The state’s public schools—the new, modernist elementary schools with their flat roofs, gleaming clerestory windows, and outdoor lockers; the grand comprehensive high schools (Sacramento, Lowell in San Francisco, and Hollywood and Fairfax in Los Angeles)—were the envy of the nation. Berkeley, the flagship campus in the UC system, emerged as the best university in the country, probably the world. It was a sweet, vivacious time: California’s children, swarming on all those new playgrounds, seemed healthier, happier, taller, and—thanks to that brilliantly clean sunshine—were blonder and more tan than kids in the rest of the country. For better and mostly for worse, it’s a time irretrievably lost.

These years are the subject of the eighth volume of Kevin Starr’s monumental chronicle of California, collectively titled Americans and the California Dream. Starr is a lumper, not a splitter, and in this 500-plus-page history of 14 years, he lovingly and exhaustively chronicles such topics as the byzantine political, fund-raising, and public-relations effort to build Los Angeles’s Music Center (and in the process illuminates the central place choral music occupied in Los Angeles’s Protestant culture, as well as the tension—once intense, now faint but unmistakable—between the Jewish Westside and the ever-declining WASP establishment of downtown, Hancock Park, and Pasadena); the evolution of the surfing, rock-climbing, and hot-rod subcultures; Zen Buddhism’s pervasive influence on California art and design; the California Water Plan of 1957 (the template for the 700-mile network of reservoirs, pumping stations, canals, pipes, and aqueducts that carries almost 2 billion gallons of water daily from Northern California to the south and remains the largest water project in world history); and, in deadly detail, the career of Dave Brubeck. 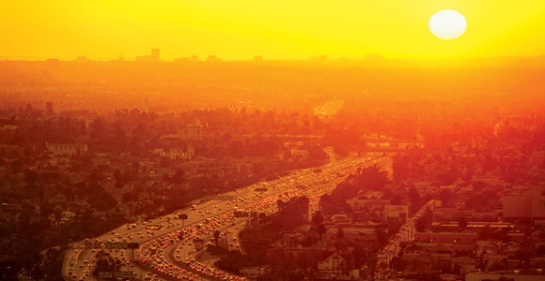 * Golden Dreams: California in an Age of Abundance, 1950-1963 (Americans and the California Dream) by Kevin Starr 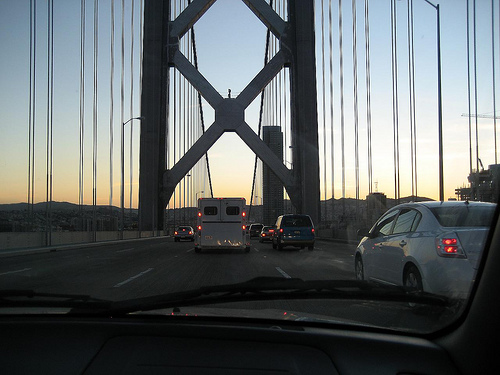 The state Energy Commission last week proposed putting a fuel efficiency label on the top 15 percent of tires with the lowest rolling resistance within their size and load class.

The rulemaking is in response to a 2003 law, A.B. 844, which requires the development of reporting requirements for tire manufacturers and a rating system for comparing tires’ fuel economy. If 6.75 million Californians replace their tires each year, the commission says, a 10 percent change in rolling resistance can improve fuel efficiency up to 2 percent and save 300 million gallons per year statewide. That is worth $30 per year for a mid-size car.

By a bipartisan vote of 24-14, the California Senate has approved May 22 as Harvey Milk Day, according to Advocate.Com. Milk, the first openly gay elected official in the United States, was slain on November 27, 1978 by jealous San Francisco City Supervisor, Dan White, along with Mayor George Moscone. Milk’s murder rocked the gay rights world, and secured a martyr’s respect for the affable politician whose advice to all LGBT activists was “You gotta give ‘em hope!” Milk would have been 79 this coming May 22, the choice of his birthday a deliberate effort to preserve his story and legacy for generations to come.