There’s a price for everything, even in the Louvre: Tomorrow, Apple will be opening up their very first Parisian Apple Store, and it’ll sit in the concourse right below I.M. Pei’s glass pyramid.

According to Bloomberg, this’ll be Apple’s 277th store, worldwide. It’s set to be slightly smaller than the one on Oxford Circus in London. But it’s not tiny: The bilevel store will employ 150 people. You can expect the place to be mobbed. The Louvre concourse is one of the most heavily trafficked places in Paris. It links all of the wings of the Louvre, and visitors to the museum have to pass by before entering the museum.

For Microsoft, it comes at a particularly irksome time. Last month they opened a very sad looking cafe to coincide with the launch of Windows 7.

By next summer, Apple will open two more stores in France–one near Opera, a major hub on the Left Bank, and another in Montpellier, the economic powerhouse of southern France.

You’ve gotta wonder just how many records the Louvre location is set to smash. The 5th Avenue store in New York, which isn’t very big at all or even particularly pleasant as Apple stores go, is thought to earn far more than any of its neighbors, with yearly receipts of around $350 million.

Come to think of it, design wise, coming to the Louvre actually makes a lot of sense–the glass cube of the 5th Avenue store was basically a straight-up theft of I.M. Pei’s glass pyramid, and his widely celebrated idea of turning the entrance to a dark, underground space into a dramatic point of pride: 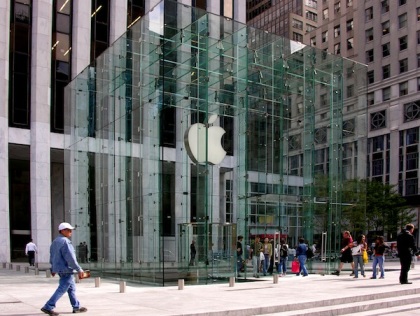 [Via Bloomberg; picture by Al Ianni]

Why do teapots dribble? French scientists say it’s all about the simple subject of surface wettability

The teapot dribble effect could be made a thing of the past, say French scientists, who it has to be said come from a country of coffee drinkers. Photograph: Graham Turner

For those who hate tea stains on their pristine linen tablecloth, succour is at hand: scientists in France have solved the perennial puzzle of the dribbling teapot. Fluids experts at the University of Lyon have produced a four-page report [pdf] that claims to offer a solution, and as often can be the case with long-unresolved problems, it is a simple one.

“Surface wettability is an unexpected key factor in controlling flow separation and dripping, the latter being completely suppressed in the limit of superhydrophobic substrates,” the report explains. “This unforeseen coupling is rationalised in terms of a novel hydro-capillary adhesion framework, which couples inertial flows to surface wettability effects. This description of flow separation successfully captures the observed dependence on the various experimental parameters – wettability, flow velocity, solid surface edge curvature. As a further illustration of this coupling, a real-time control of dripping is demonstrated using electro-wetting for contact angle actuation.”

This scientific jargon boils down to the fact that tea tends to stick to the inside of the spout as it is poured. The flow of tea then begins to stop-start, causing a dribble effect. The team, led by Cyril Duez, say the use of “superhydrophobic surfaces” – essentially water-repelling linings – on the inside of the spout can avoid dripping and “thus beat the ‘teapot effect'”.

The scientists are not the first to bend their minds towards the problem. This year the retailer Debenhams claimed to have designed a dribble-free teapot with a “multi-faceted solution” that involved a larger spout, “tea bag baffle” and redesigned lid. As far back as 1998 the British inventor Damini Kumarb was hawking her solution – the D-pot – around the BBC and other media groups. Her solution was a groove under the spout.

The latest intensive research appears to be the first to tackle the dribbling problem from an explicitly scientific perspective. The Lyon team’s verdict: marry a superhydrophobic surface with the more traditional method of using a sharp edge at the end of the spout, creating a drip- and hassle-free pot.

What about other brew-time dilemmas? In 2003 the Royal Society of Chemistry released guidance on how to make the perfect cup of tea [pdf], and in 1998 researchers from the University of Bristol published a scientific formula for dunking a biscuit.

Dementia may have been caused by the Second World War, says scientist

[Dr Ritchie’s] claims are based on studies of French citizens forcibly expelled from Algeria in the 1950s.

Known as the ‘pieds noirs’, they had crossed the Mediterranean and many had settled in the coastal district around Montpelier, where the research was conducted.

She said: ‘They had suffered extreme stress, losing their homes, and having their lives threatened, sometimes by people who were once their neighbours.

‘The ones who had the worst symptoms (of dementia) now were those who had suffered most at the time.

Serge Gainsbourg – All the things you are

END_OF_DOCUMENT_TOKEN_TO_BE_REPLACED

Malle was already a jazz fan when Jean-Claude Rappeneau suggested to him that Miles, who was in the France for a brief tour, be asked to record the soundtrack; he readily agreed. By creating a relaxed environment in the studio, where the musicians could view main scenes of the film in a loop and then improvise in response to what they saw, Malle clearly understood that little direction was necessary to Miles.

And Miles, with a sympathetic band, including saxophonist Barney Wilen, pianist Ren’ Urtreger, bassist Pierre Michelot and drummer Kenny Clarke, was able to create music with his typical minimal guidance. In fact, with the exception of “Sur l’autoroute,” which was based on the chords to “Sweet Georgia Brown,” Miles provided only the barest sketches of direction. Malle also provided some input, suggesting, for example, a passage of only bass and drums, which was ultimately not used; he also decided, in the final analysis, which takes would be used as final takes.

The whole session took a mere four hours, but the music is magical (…)

–John Kelman in All About Jazz

END_OF_DOCUMENT_TOKEN_TO_BE_REPLACED 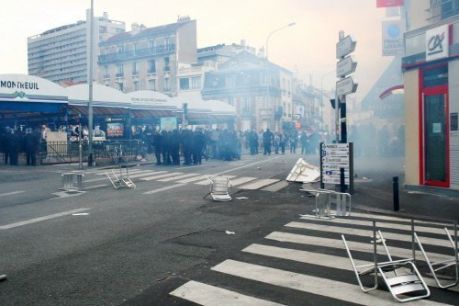